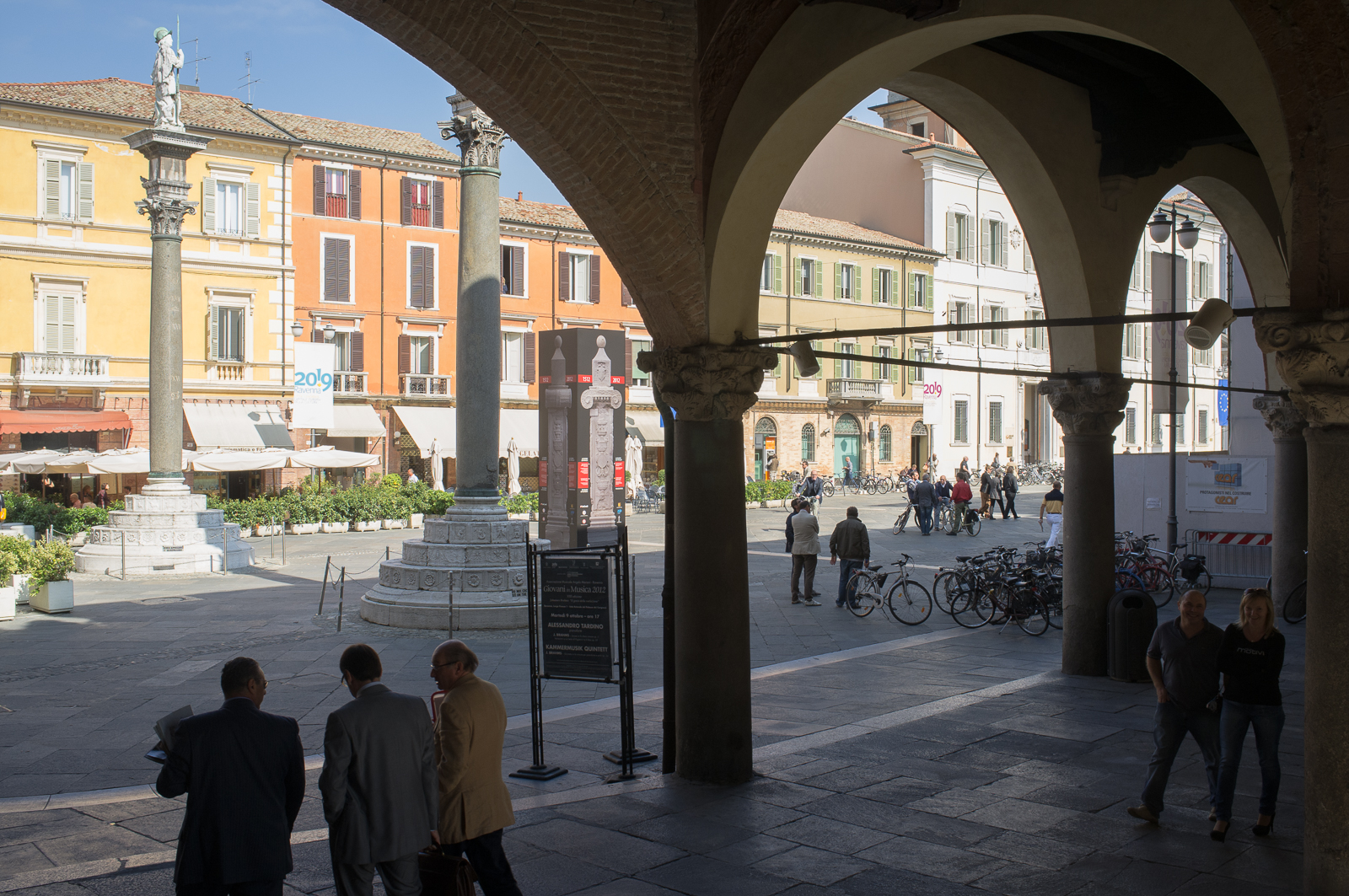 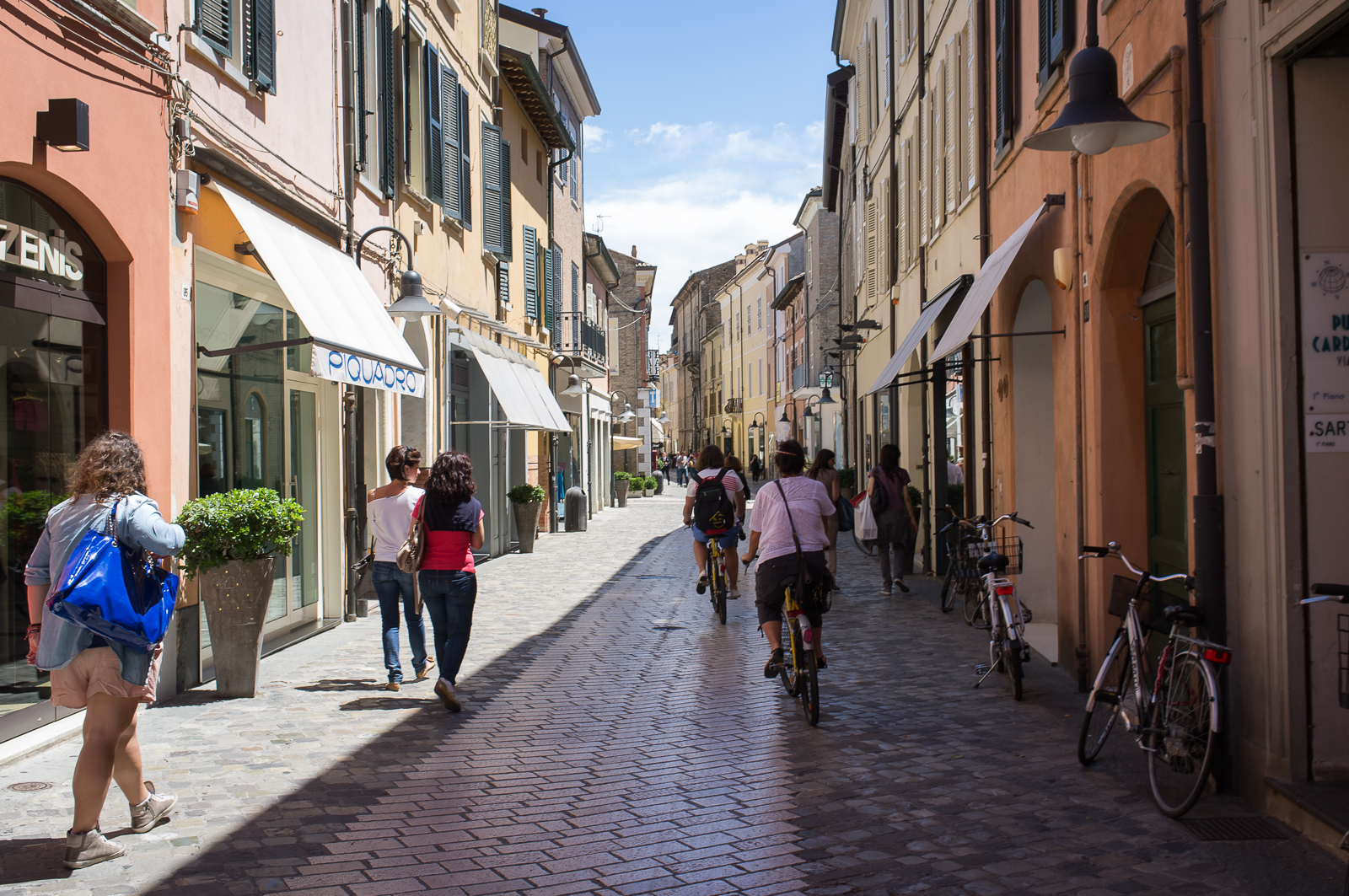 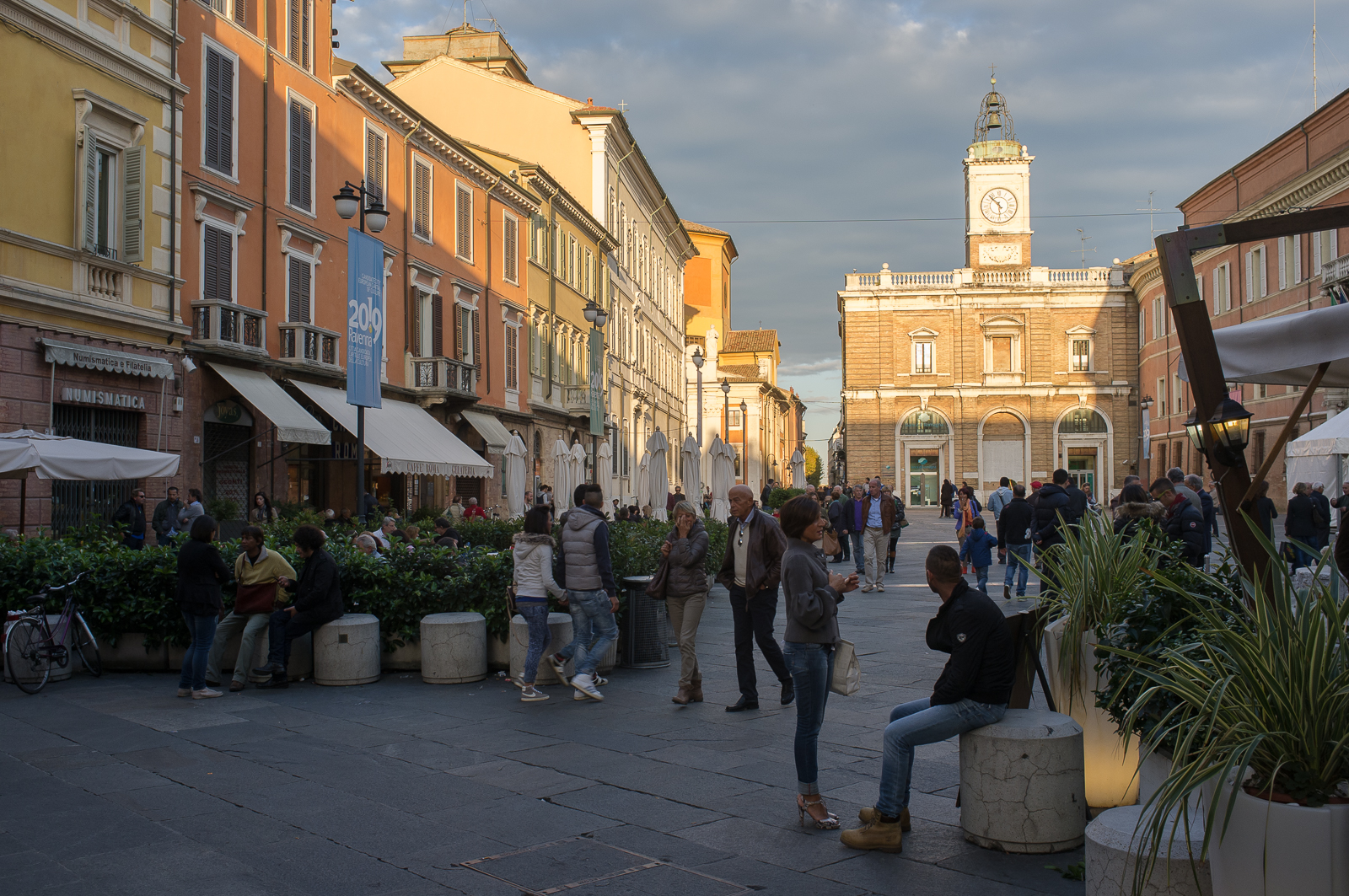 Ravenna is a small town south of Venice on the Adriatic coast, about an hour’s drive from Bologna

The historic centre of Ravenna is a quiet little haven with a perfect blend of the things many visitors have come to expect from an Italian town: stunning works of art and architecture, good food and wine from the region as well as seaside resorts and endless sandy beaches on the Adriatic coast just minutes away.

Once upon a time the capital of the Western Roman Empire, ruled by an empress by the name of Galla Placidia, Ravenna alone has eight individual monuments listed as World Heritage. One of them is a mausoleum the empress had made for herself, although she was never actually buried there. With the exception of another mausoleum, the massive tomb of the Ostrogoth King Theodoric, each of these monuments contain superb mosaic art of Roman-Byzantine origin, created in the 5th and 6th centuries.

Although mosaic art did not originate in Ravenna, the town is justifiably called the City of Mosaics in Italy, thanks to these truly outstanding Byzantine mosaic artworks in Galla Placidia’s mausoleum and in the basilicas here and in the nearby village of Classe.

The Basilica of San Vitale captures the essence of the Byzantine period in 5th century under Emperor Justinian’s rule. In the 4th century, the strategically important town of Ravenna had been the capital of the Western Roman Empire, then capital of the Ostrogoths under King Theodoric, before it was conquered by the Byzantine general Belizarius.

Emperor Justinian soon designated Ravenna the capital of the Prefecture of Italy, and although he never visited the town himself, both he and his wife Theodora are very much present in the large panels on either sides of the apse (see photos below).

The basilica construction has an octagonal plan with both Roman elements such as the dome, the shape of doorways and the stepped towers, as well as Byzantine elements apparent in the polygonal apse, the capitals and the use of narrow bricks.

It is also worth noting that the San Vitale basilica is modeled on the much grander Hagia Sofia in Istanbul. It was built only two decades later, while Emperor Justinian ruled the Byzantine Empire from Constantinople. About three centuries later, Charles the Great, or Charlemagne, built his famous cathedral in Aachen in Germany, greatly inspired by San Vitale’s octagonal floor plan and soaring structure. 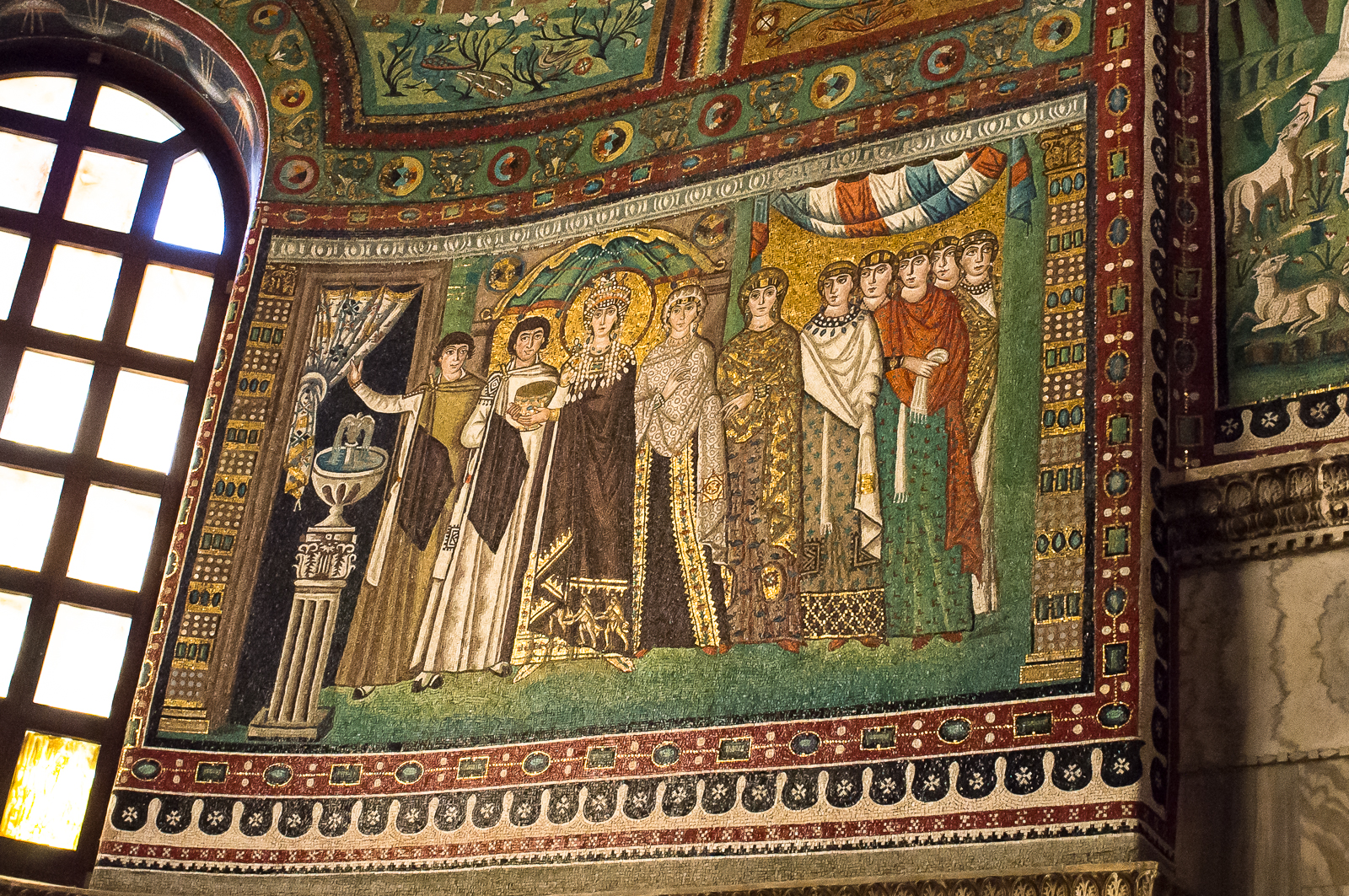 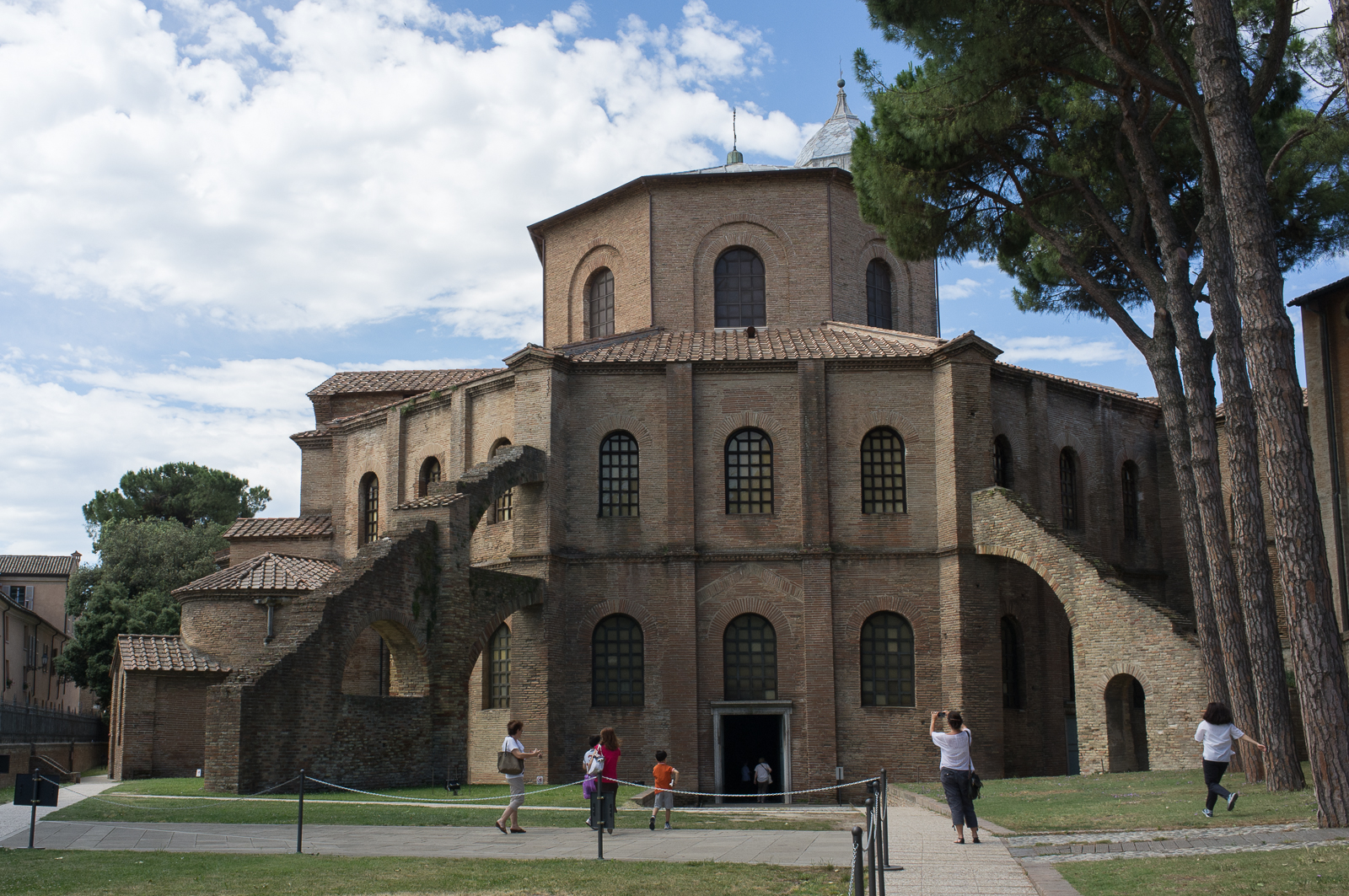 The Basilica of Sant’Apollinare Nuovo was originally built under Theodoric, King of the Ostrogoths, in the early 6th century CE as his own palace chapel.

The entire length of the walls on both sides of the nave are covered in resplendent scenes of golden mosaics. The 26 panels depicting the life of Christ, the large portrait of Christ enthroned, the ones of Theodoric’s palace in Ravenna and the port in Classe date from the Arian period under Theodoric.The basilica was converted into a Catholic church and reconsecrated later in the 6th century, and subsequently, some of the original artworks depicting scenes from Theodoric’s court were replaced, most notably the image with the hand sticking out from behind a curtain.

In the mid 9th century the relics of Saint Apollinaris were taken from the Basilica of Sant’Apollinare in Classe and placed here instead. “Nuovo” (new) was then added in order to differentiate it from the church in Classe. 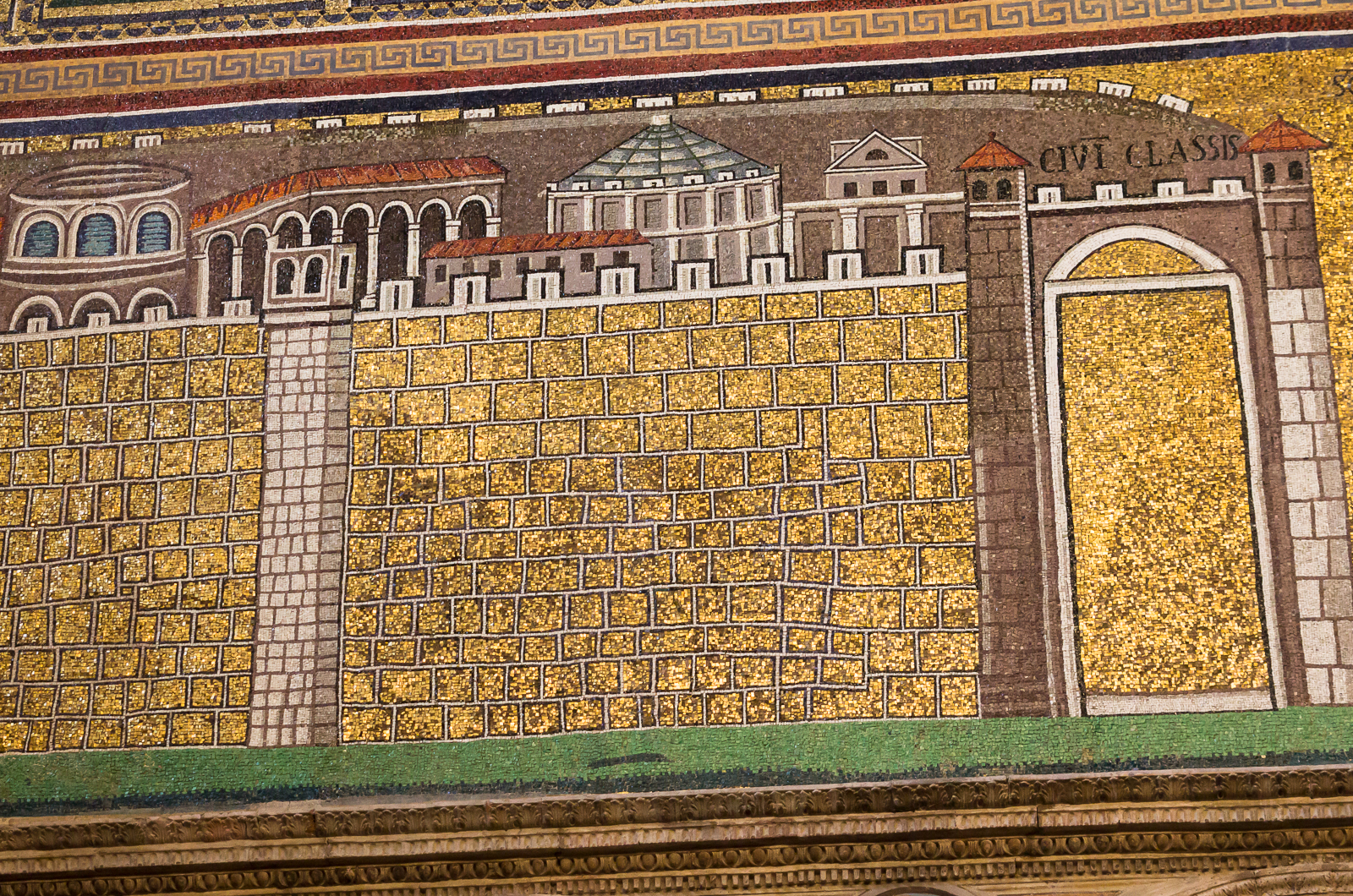 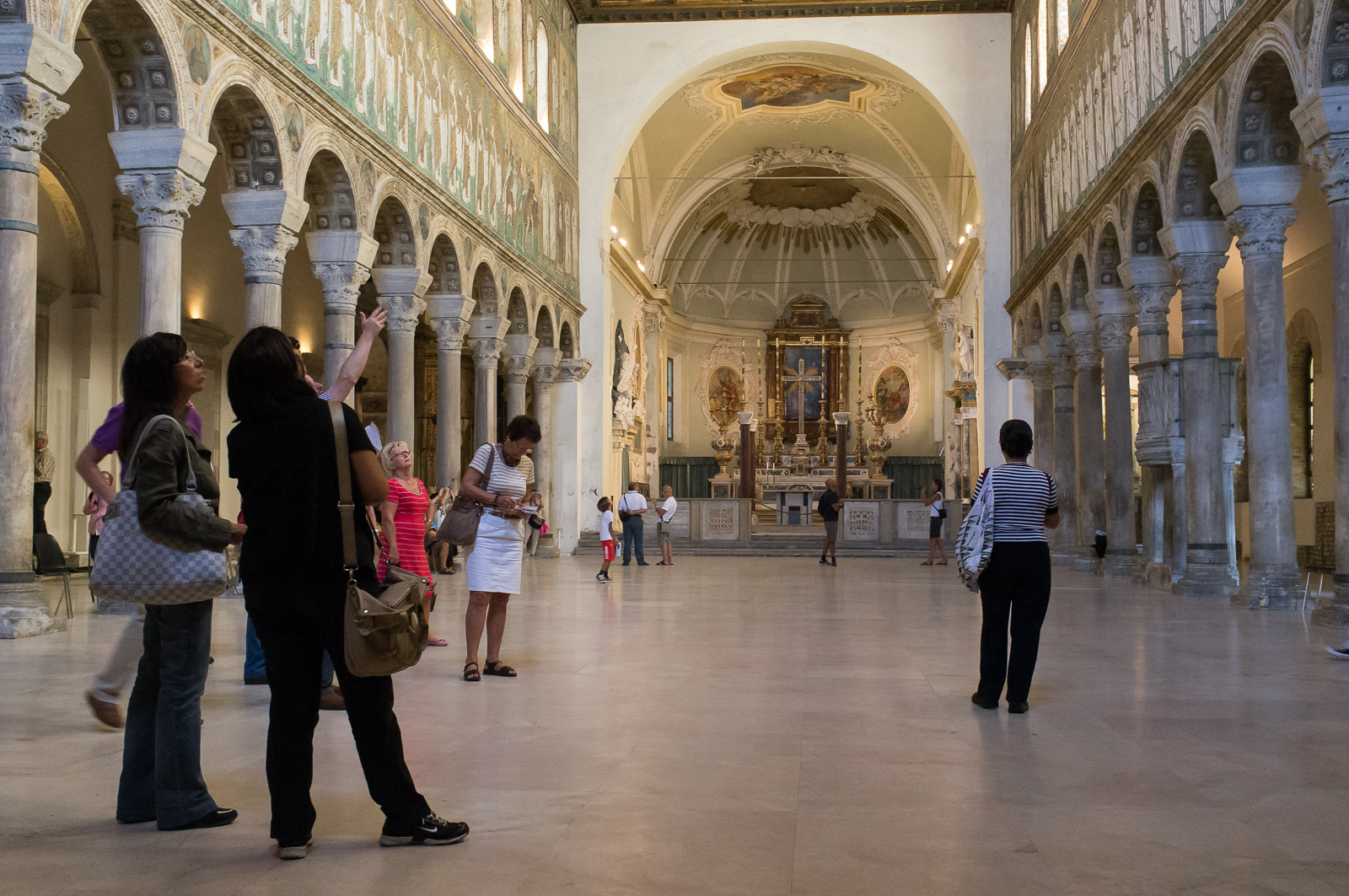 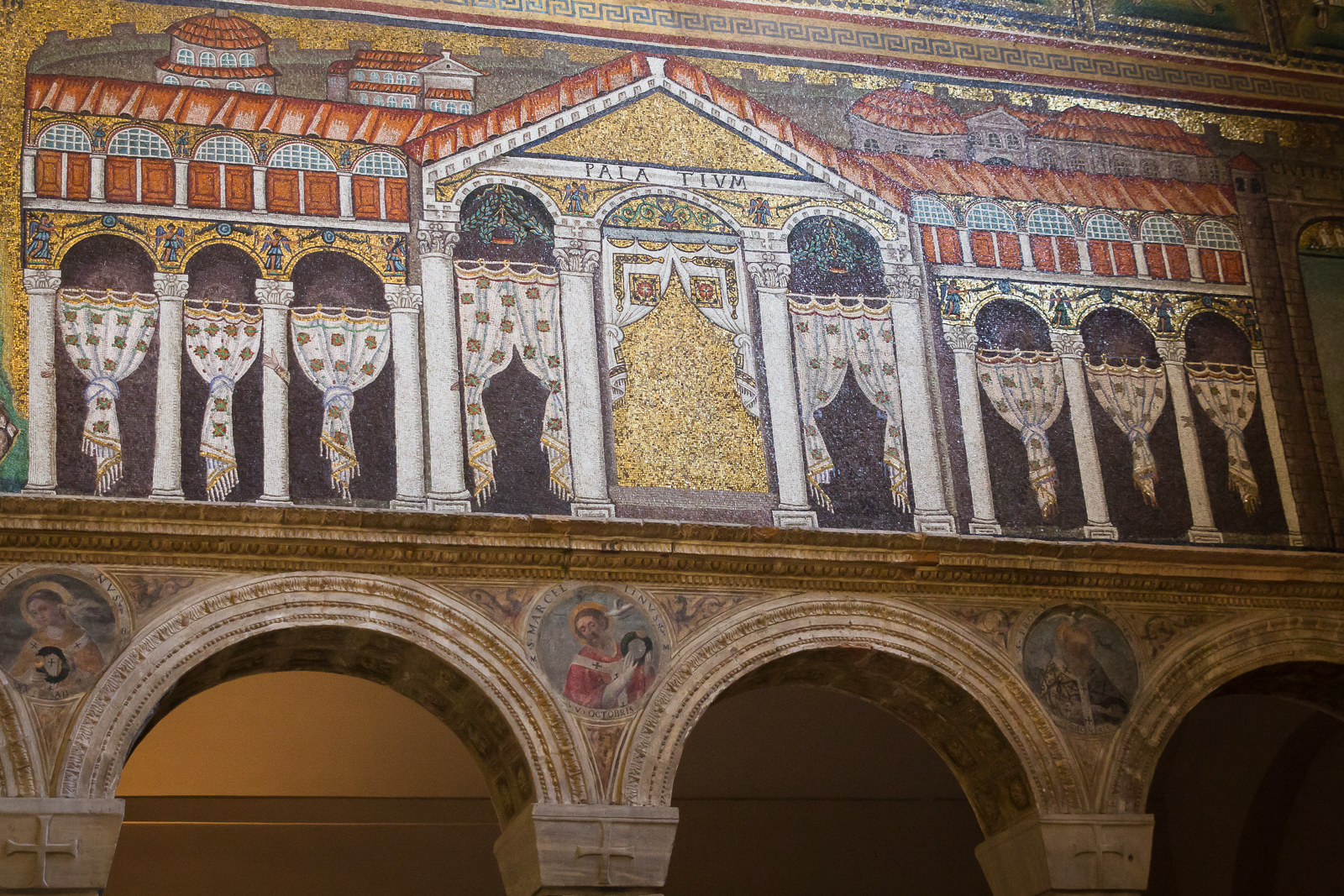 Built in the early 6th century, the basilica is contemporary with the Basilica of San Vitale but its layout is similar to the Byzantine style basilicas of San Giovanni Evangelista and Sant’Apollinare Nuovo in Ravenna. As you enter the spacious nave you are immediately drawn towards the magnificent mosaics in the apse. 58 wide windows, including five in the apse, flood the interior with light. The overall interior design is exquisite, understated yet grand.

The nave is supported by slender marble columns topped with beautifully carved Byzantine capitals depicting acanthus leaves. Above the columns are a series of fresco portraits of archbishops of Ravenna, dating from the 18th century. Saint Apollinaris – one of the first bishops of Ravenna – is said to be buried here. 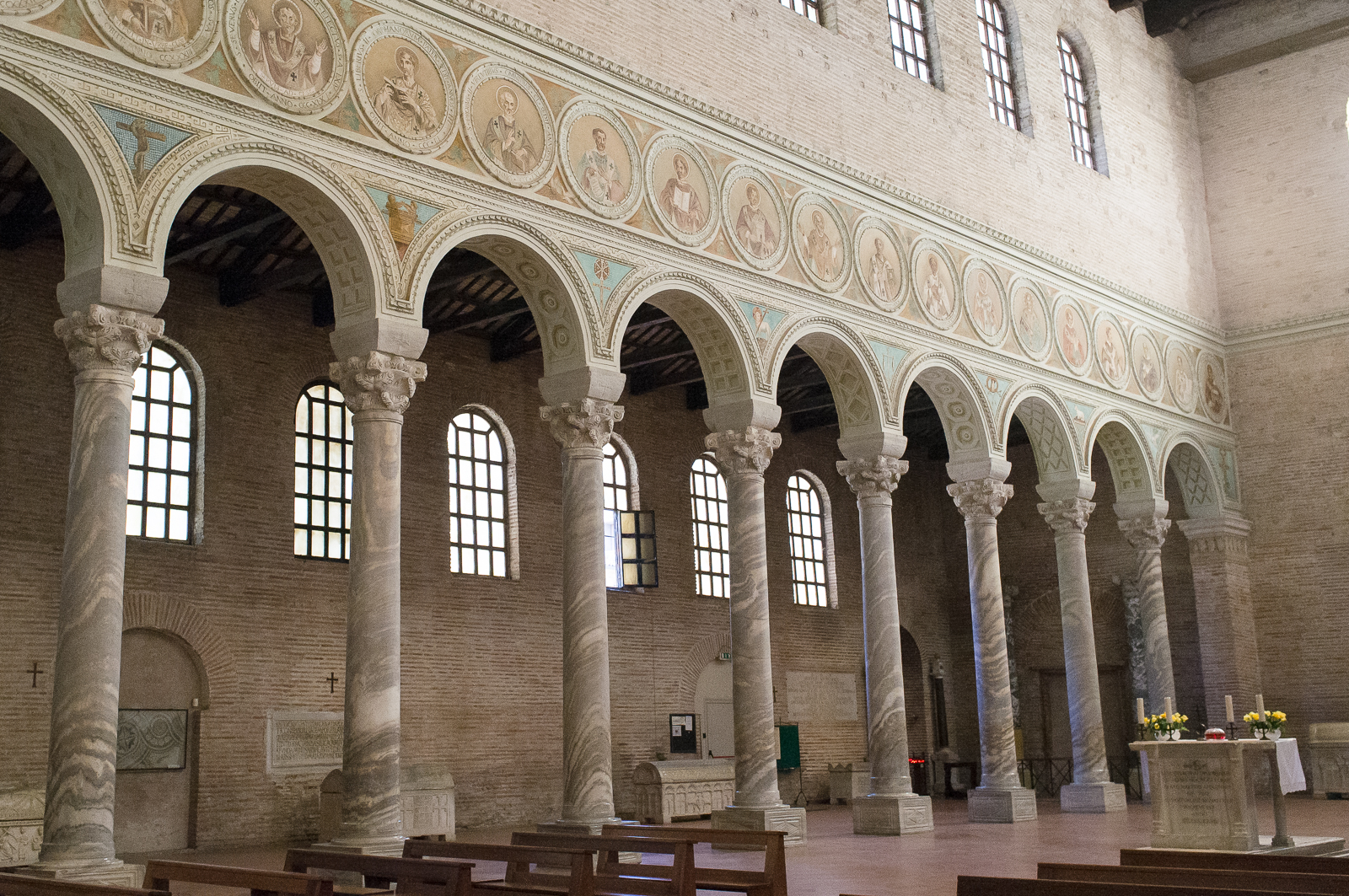 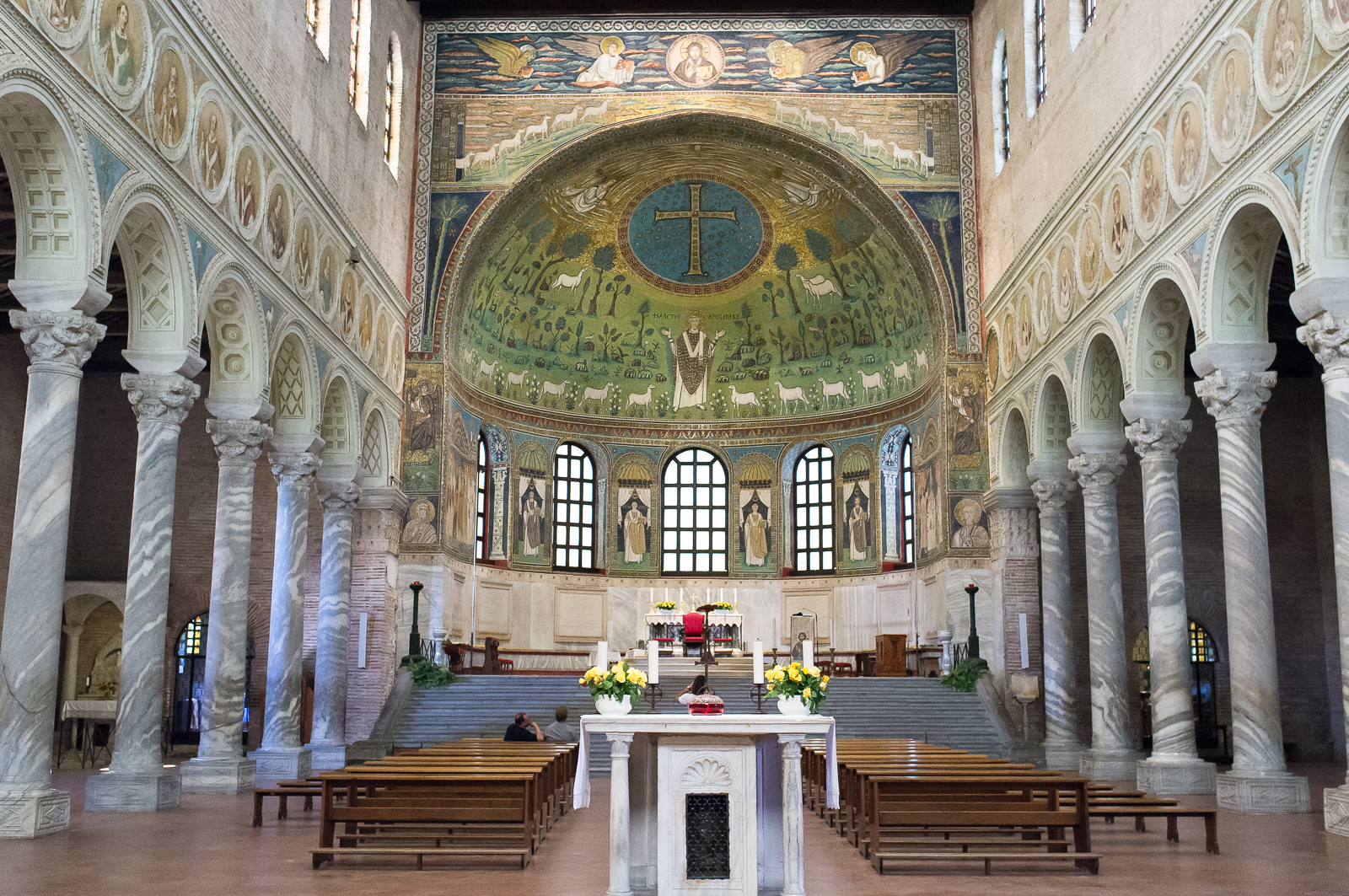 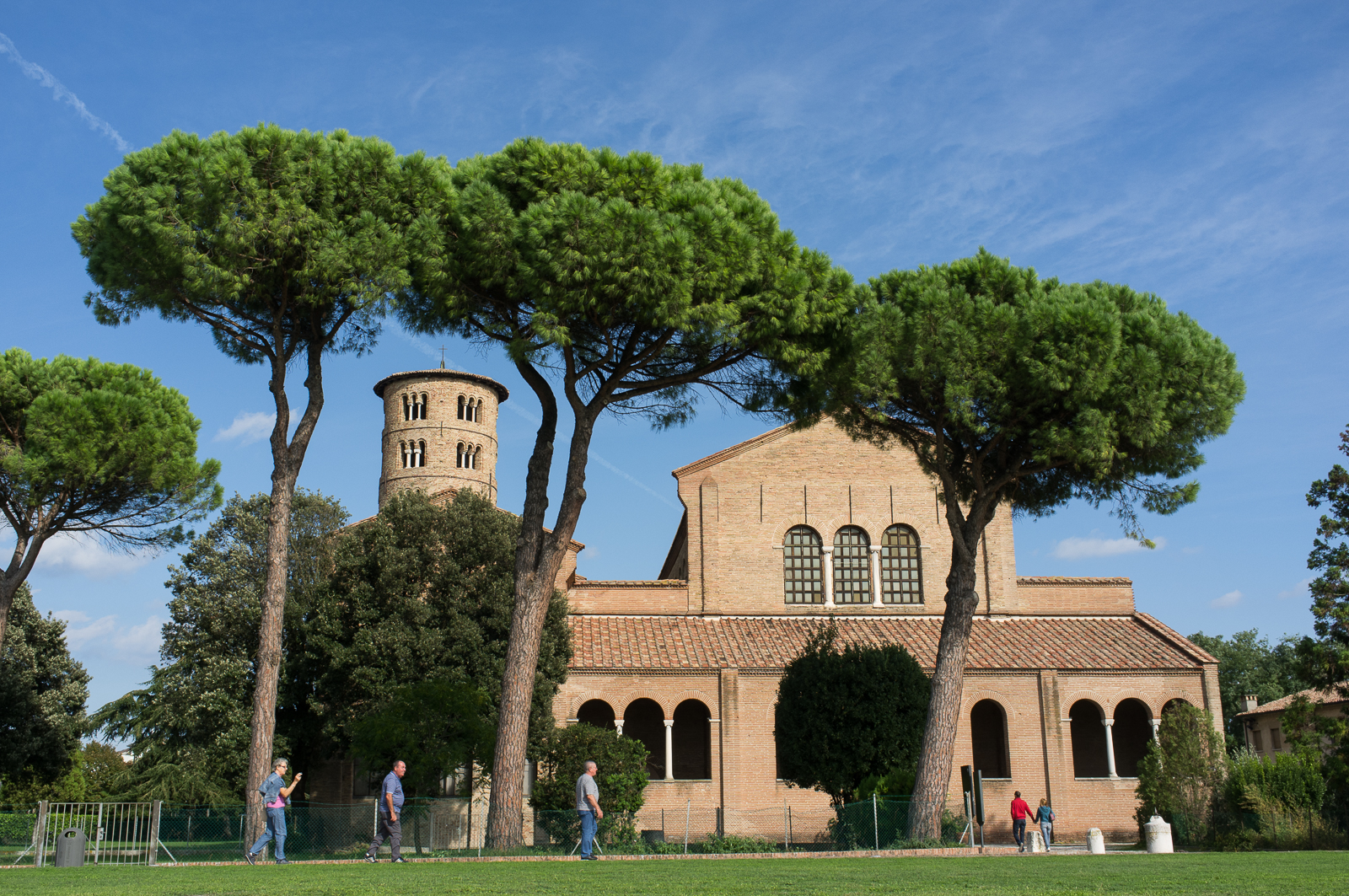 Basilica of Sant’Apollinare in Classe
Ravenna

The Mausoleum of Galla Placidia

Inspired by the starry sky, the famous jazz singer Cole Porter wrote the song “Night and Day” after his honeymoon visit here…

The Mausoleum of Galla Placidia is situated in a the corner of the garden of the Basilica of San Vitale. Built in the years before 450 CE as Galla Placidia’s own resting place, it is one of the oldest buildings in Ravenna.

Galla Placidia was born in 392 in Constantinople, a daughter of a Roman Emperor. She lived in Rome when the Visigoths came and sacked the city in 410, led by King Ataulf. She marries the Visigoth king in Narbonne. Ataulf gets murdered and the next king trades Galla Placidia back to the Romans in exchange for grain. She unwillingly marries Constantius, a Roman general who is co-emperor with Gallas Placidia’s brother Honorius.

The mausoleum was built in the shape of a cross, and from each arm, a soft light filters through golden alabaster windows. This marvellous little gem was never used as Galla Placidia’s final resting place. The Empress died and was buried in Rome in 450. 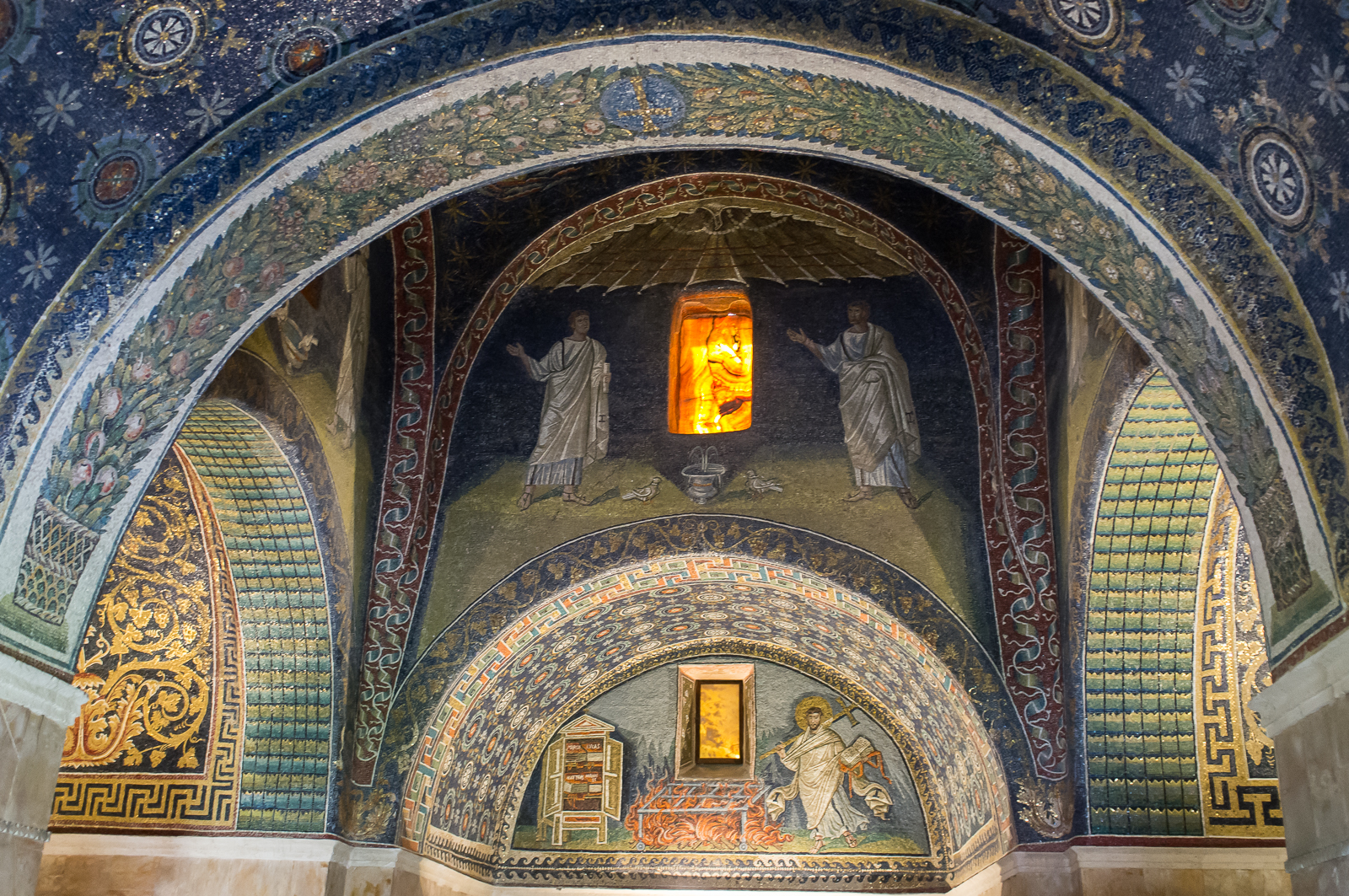 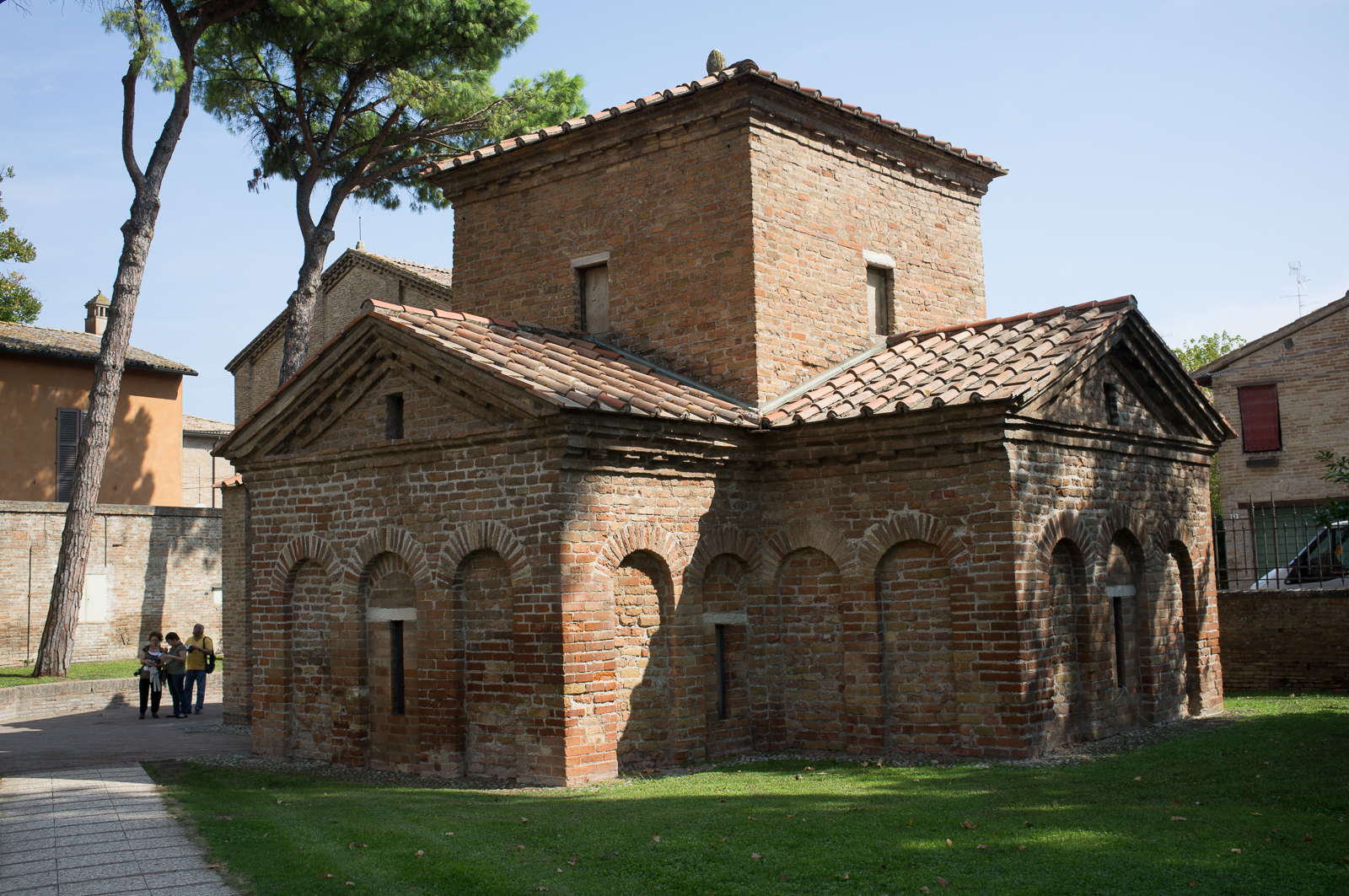 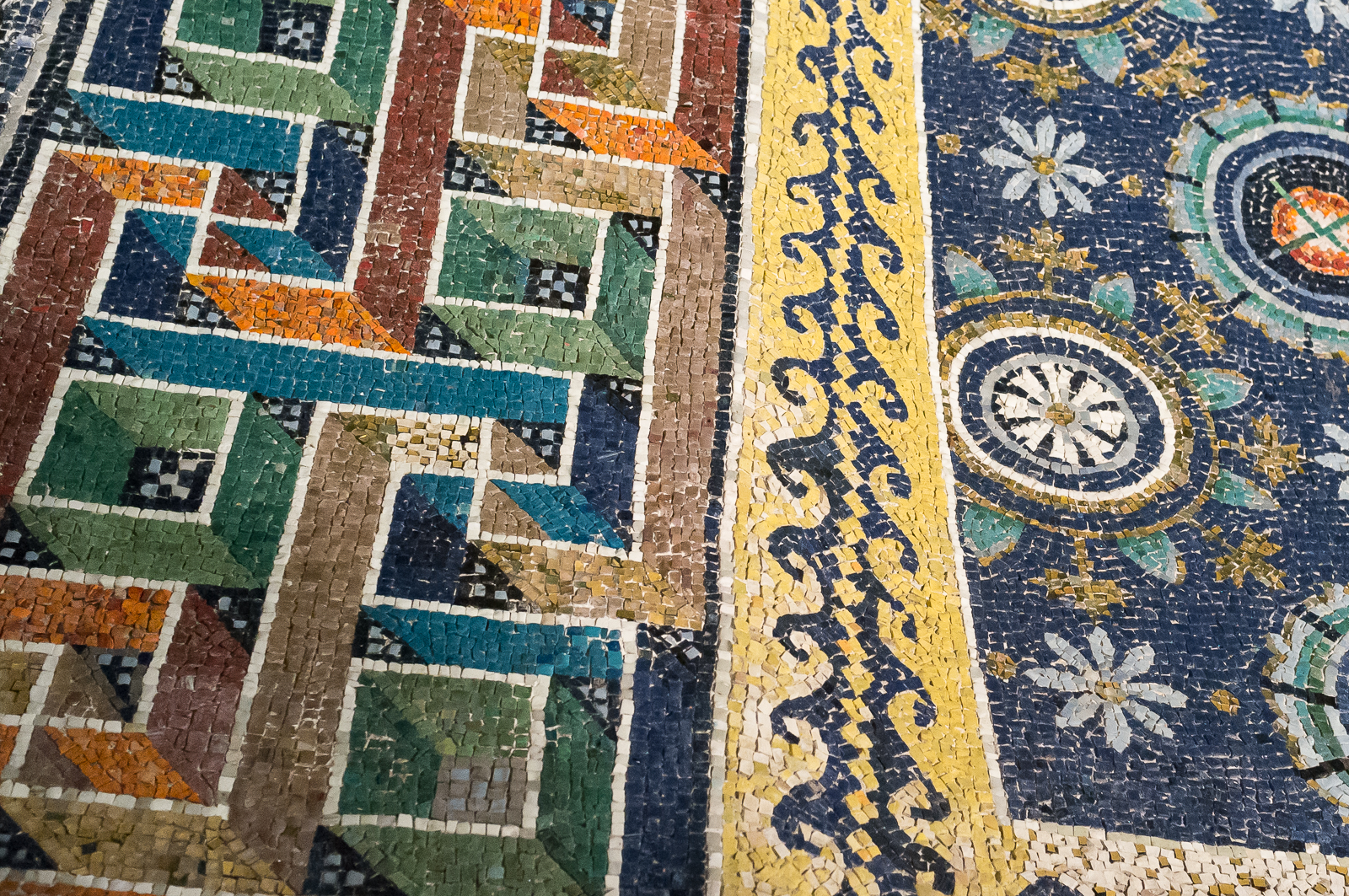