Cathédrale Notre-Dame de Reims, along with the cathedrals of Chartres and Amiens near Paris, are the departure points of the Gothic art and architectural style, inspiring construction of cathedrals throughout Europe. Erected between 1211 and 1516, Reims Cathedral is typically decorated with numerous sculptures of biblical characters and scenes, but at Reims the abundance of sculptures was integral to the overall style of the building.

Cathedral of Notre-Dame including the Former Abbey of Saint-Rémi and Palace of Tau were included on the World Heritage list in1991 for being a masterpiece of Gothic art and architecture (the cathedral), influencing numerous later constructions in Europe, particularly in Germany.

The complex as a whole is directly linked to the history of the French monarchy and subsequently for the evolution of the balance between Church and State, in France as well as in Europe in general.

Among them is the symbol of Reims, the iconic Smiling Angel, situated right above the main entrance. Her sweet smile stays with you as you walk inside, reminding you perhaps of the importance of fairness in all matters. She was, in fact, among the cathedral’s fortunate survivors of heavy bombardments of Reims by German forces in the first World War (1914).

In 2011, hundred years after the start of WW1, two sets of stained glass artworks created by German artist Imi Knoebel (1940) were installed in the cathedral’s Saint Joseph chapel (see header photo) and in the Sacré Coeur chapel. Enmity and emotional scars from old strife tend to run deep between nations. Inviting a German artist to create art in a cathedral and city they nearly completely destroyed, in a city and cathedral that for centuries had been the most important site for the coronation of French kings, would for a long time have been inconceivable.

In 2015, a third artwork consisting of three windows was installed in the Jeanne d’Arc chapel, donated by Knoebel himself, the German Federal Ministry of Foreign Affairs and the NRW Arts Foundation, as a gesture of pardon for the destruction of the cathedral in 1914.

A small child at the time, Imi Knoebel did apparently witness the bombing of Dresden in the second World War. Only the artist will know to what extent past conflicts or personal war-time memories have affected the creation of these stained glass windows. Looking at the them, however, we see a shattered world of flat, irregularly shaped fragments in white and shades of the three primary colours dominated by blue. The abstract restlessness is held in check by the simple geometry of the slender Gothic framework. The artworks have an immediate and refreshing impact, in striking contrast to the otherwise sombre Gothic ambiance of the cathedral.

Read more about Reims and France on Spots France…

Artwork in the axial chapel (apse)

In the axial chapel, between Knoebel’s expressive windows, is a quietly moving work by Marc Chagall (1887-1985). The world renown artist worked closely with the Jacques Simon Workshop in Reims on a number of stained glass projects both in France and internationally. Commissioned by the Committee of Builders of Champagne-Ardenne and Friends of Reims Cathedral, the artwork which took six years to realize was inaugurated on June 14, 1974,

The central window depicts the history of Abraham and the last moments of the earthly life of Christ. The rose window represents The Holy Spirit. 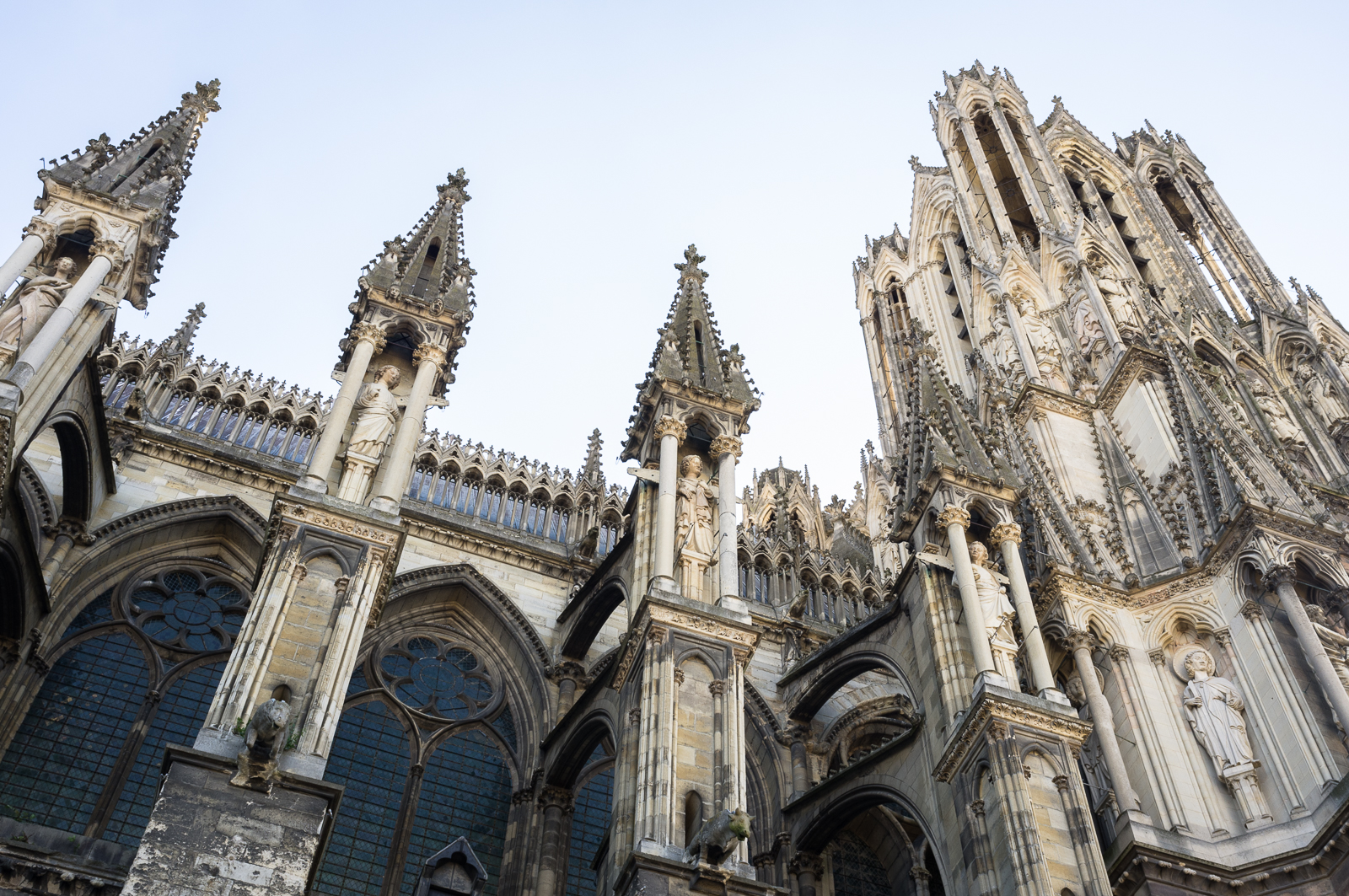 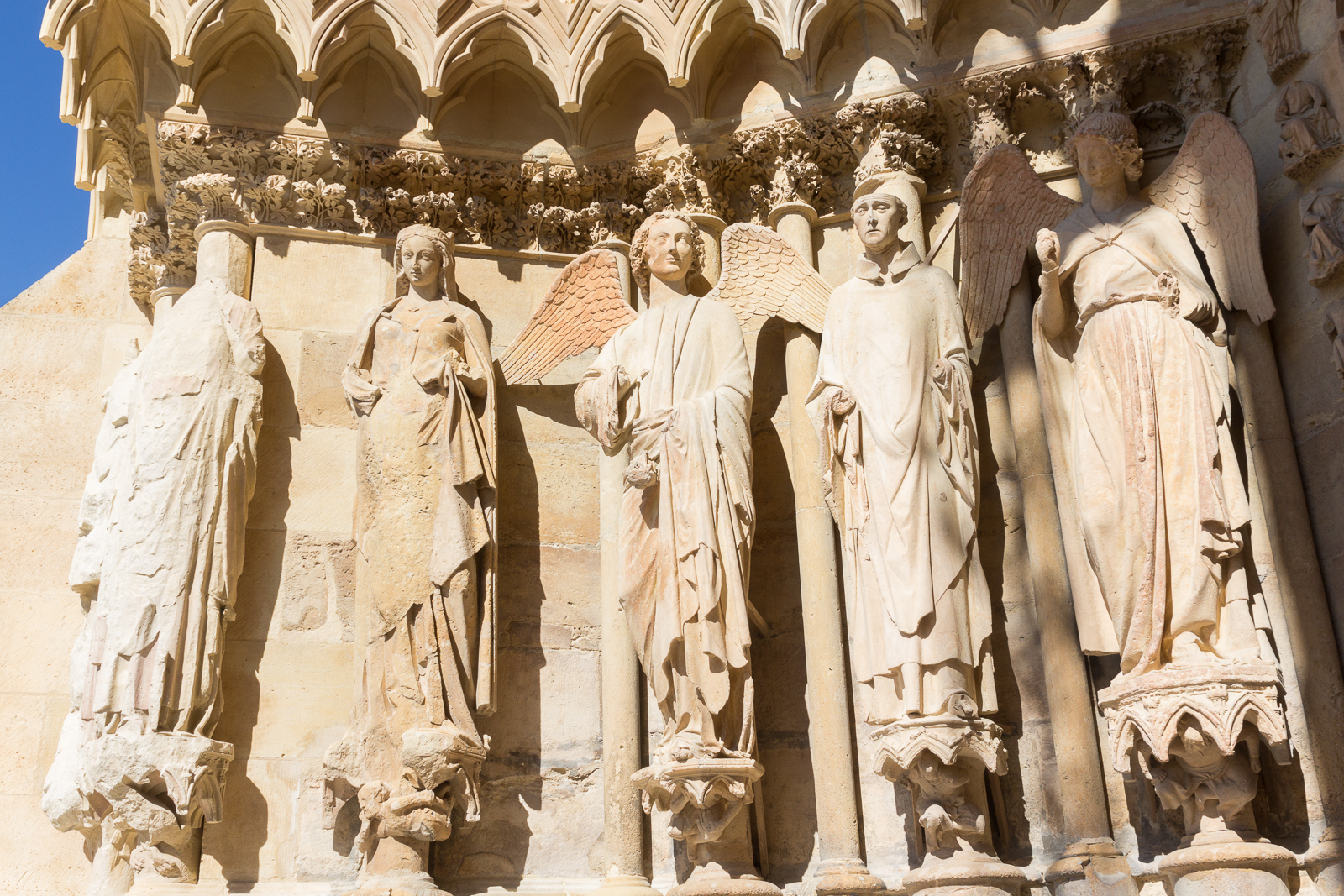 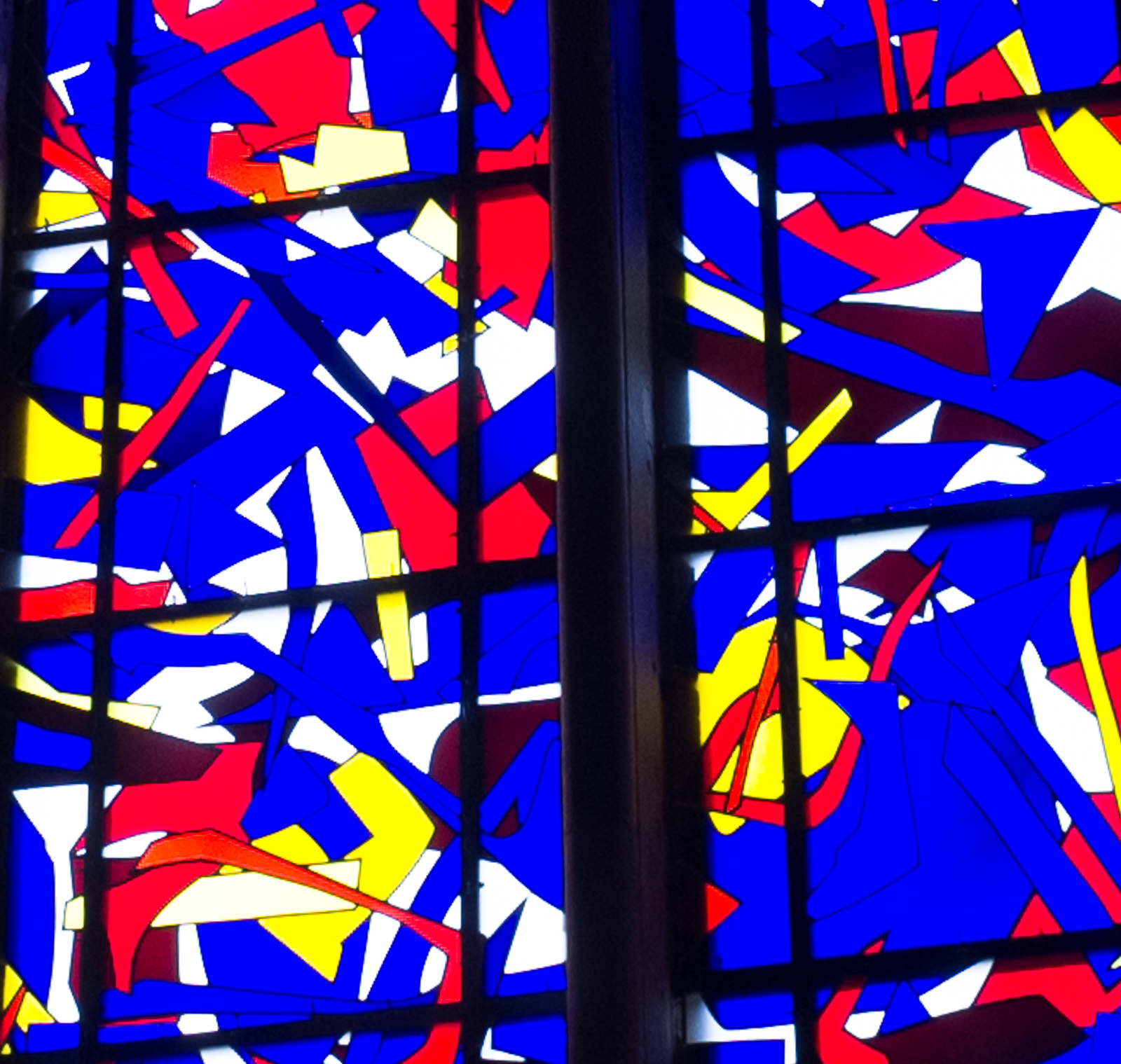